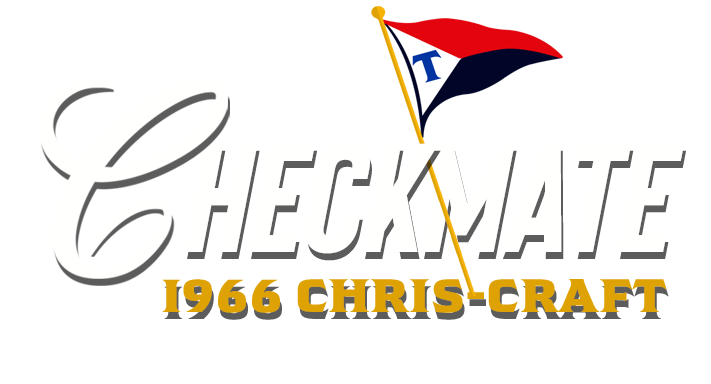 Every story has a beginning.  For me and my love for boats it started a long time ago.  My dad worked for Dowell as a purchasing agent and bought a lot of pipe for the oil well industry from the Tyler Dawson Company.  As luck would have it, Tyler Dawson owned a mid- 50s, 32 ft Chris-Craft Cruiser, and would let their best customers use it one weekend a year.  So, for a number of years while I was a pre-teen, our family went to the lake and stayed on Tee Dee.  I loved that boat and always looked forward to the weekend on the lake.

These memories are still in my head and I can remember dreaming that maybe someday I could own a Chris-Craft Cruiser and enjoy it with my family.

Fast forward to 1998.  A friend called me about a cruiser that was being sold for past due dock rent.  It was a 1966, 35ft Sea Skiff Corinthian.  The boat was floating, however it looked as though it had been neglected for a number of years.  Paint peeling, mildew smelling, engines rusting with no heads, etc.  One friend told me it should be burned.  Well, it was cheap so Alicia and I decided to buy it.  I borrowed a trailer and truck and went to the lake to pull it out.  It had to be towed to the ramp.  When we got the boat out of the water, I took my pocket knife to see the integrity of the bottom wood and I was able to push it right through the bottom planking.  It did however aid in draining the water out of the hull.  At that point I was also thinking it should be burned but no, it was my cruiser and I always wanted one.

I started by stripping out all of the interior cabinets, walls, bedding, galley, basically everything down to the bare hull.  This is when I realized that twenty-nine of the steam bent oak frames needed to be replaced and 6 planks on one side and 4 on the other needed replacing also.  The frames were spliced at the waterline and marine plywood was used to build new planks.  This is a lap strake, 1/2’” plywood hull.  I used a two part urethane from Smith, “The penetrating epoxy people”. To bond the planks together, all of the inside of the hull was sanded to bare wood, soaked in CPES and painted with bilge grey.  The outside of the entire boat was sanded to bare wood, sealed with CPES, two coats epoxy barrier coat above the water line and 4 coats below.  Interlux “Perfection” was used above the waterline and “Racing Bronze” below.  The transom needed to be pulled off to get at some soft wood.  Some of the rear structure was replaced and all of the rudder packing and strut bearings replaced.  These assemblies were removed so CPES and new sealant under the bronze fittings could be applied.  The transom is a ½ inch sheet of 5 x 10 foot Okume plywood and once stained and clearcoated you’d think it was mahogany.  Just don’t look at the grain too closely.

The interior came next.  Most of the original cabinetry was used on the port side.  The galley was refurbished and the dinette redone.   This boat originally had a very claustrophobic feel inside.  The two forward bulkheads really closed in the cabin and the head took up the forward starboard quarter of the cabin.  The bulkheads are very structural and must be in place to support the cabin roof.  In order to get more visibility I cut large openings in the panels and moved the head to the aft bulkhead.  The devan/bunkbed was moved forward opposite the dinette.  This offered a lot of room and gave a feel of “airiness” inside the cabin.

Now it was time to work on the helm.  All of the instruments were sent to Dale Kocian to be rebuilt and he did a beautiful job.  We are no longer sun worshippers or fishermen for that matter so we felt like extending the top to the rear 6 feet would make it easier to enclose the aft end of the boat.  The cabin roof and the aft roof were fiberglassed to keep out the water.  The decks were also “glassed”.  I didn’t want to deal with staining, peeling and leaking of the Nautilex covered decks and have found the fiberglass works well.

Since the engines in the Skiff weren’t usable I went looking for replacements.  It just so happened that a local Chevy dealer had a 28’ Sea Skiff in which he had just installed new 350’s.  Apparently his kids took the boat and had too many “spirits” before they hit something under the water, like a rock, and sunk the boat.  I bought it for the engines and scrapped the rest of the boat.  The engines turned out to be like new inside after I took them apart and cleaned them up.  I also reinstalled the original Chris-Craft marine manifolds and transmissions after going through them.

Because of the Oklahoma summer heat I decided to install a generator and air conditioner.  The old 60’s Onan 2.5 kw had to be rebuilt.  It was fairly simple being a single cylinder.  The only problem was getting parts as Onan is no longer supporting their old stuff.  One thing I did learn is the old gen-sets run at 3600 RPM and are not very quiet.  The newer ones run at 1700 and we will probably look for a newer unit in the future.

The upholstery and outside trim colors had to be decided upon.  My wife, Alicia, had on a turquoise tee shirt one day and we thought it would make a great color with the mahogany and white giving it a vintage feel.  We sent the t-shirt to Paints Plus in Stover, Missouri so they could match the color in Awlgrip paint.  We now call it “t-shirt blue”.   About this time we bought a Riva Ariston project.  Alicia agreed to the purchase but we both decided I needed to finish the cruiser before working on another project.  On researching the Ariston we found that some of the early ones used a black and white check fabric on the seats and Alicia thought it would look great with the turquoise on the Skiff so I ordered the fabric from Italy through Alan Weinstein and finished out the interior.  The name Checkmate was chosen to reflect the interior décor and to indicate the “game” was at an end and we had won!

WORTH THE HARD WORK

Once Checkmate was reloaded onto the trailer, we installed the engines.  The helm area was finished out with mahogany planking instead of the Nautilex as well as the forward area just behind the windshield.

We headed for the lake with the finished boat on a rainy day, fifteen years after purchasing it.  Checkmate was launched and all systems were go.  Very little has had to be done on it since launching.  We have had fun on the boat now for the last seven years and hope to someday put it in the Arkansas navigation channel and head for New Orleans, or Florida or New York…maybe I’m just dreaming.

One has to really commit to a project like a cruiser.  You don’t think about toilets, stoves, sinks, cabin interiors, lighting, 110 volt circuits, twin engines, lots of chrome and many square feet of surface area to be painted, varnished or whatever.  The value of the boat certainly doesn’t warrant all the work.  It’s no wonder so many cruisers are burned every year or sitting on “death row” on blocks in the back of the yard.  However, I can say I enjoyed the project and only spent about 5 or 6 years of actually working on the boat with any consistency.  As we all know, “Life happens”.  It is very hard to stay focused on such a big project.  During the 15 years that I worked on the boat I should add that there were many other projects that took time away from the cruiser.

Cruising the lake on a cruiser is a different feeling than going full throttle in a runabout.  Now that it’s done, it’s very satisfying to go out with family and friends and see all the other boat owner’s heads turn as we motor by. We get a lot of waves and thumbs up to show their appreciation of the beauty of the old boat.  It was a long project but now that it’s done it feels well worth it.

It feels good to give new life to an old boat.  This boat was originally sold new here on Grand Lake and has cruised these same waters for 50 years.  I hope it is still here in another 50. 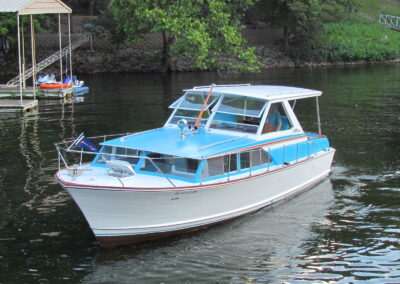 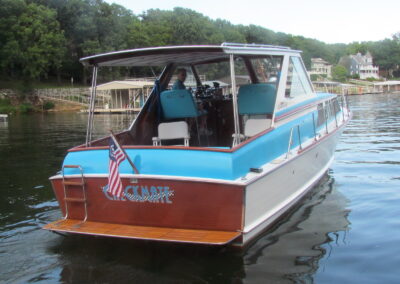 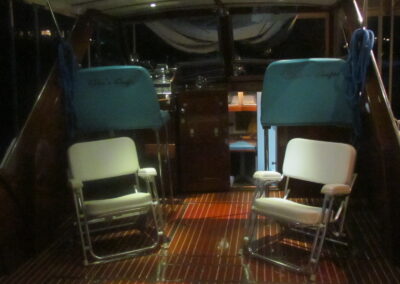 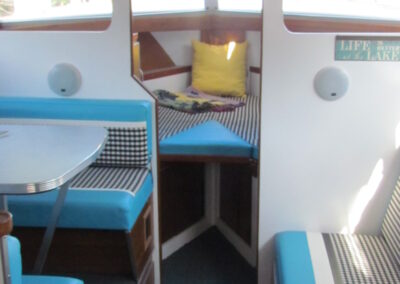 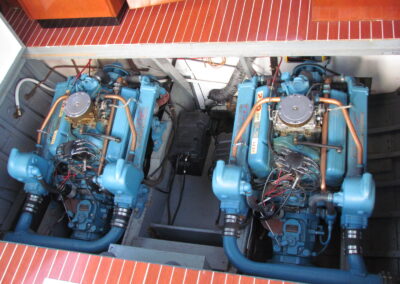 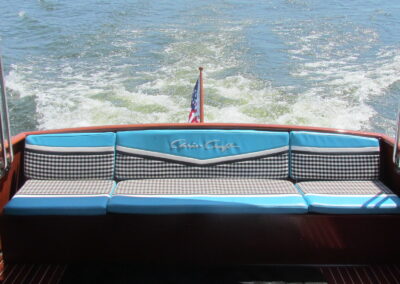 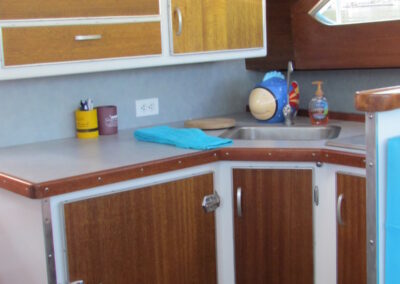 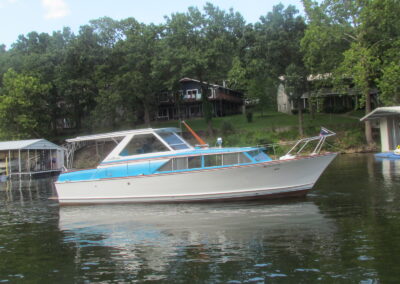