We named the boat after the undersea home of SpongeBob SquarePants and his cartoon friends (a favorite of our sons Brian and Brad).

Bikini Bottom was a major rebuild project that Jerry Carter had worked on for some time at Granlibakken resort in Tahoe City.  Not much is known about the history before he bought it.  With our friend’s unexpected passing, we acquired the boat in the spring of 2003, which at the time was a bare, sanded row boat and jigsaw puzzle, with boxes of rebuilt and re-chromed parts lining the walls.  After prior years sitting in the elements, the deck was severely cracked and stained, and we decided to have it fully replaced.  This work was done by the talented Dave Lobb and Rudy Rudloff in Seattle and later in Auburn.  After a crushing rear-ender while trailering in 2006, we decided to replace the hull as well, and take advantage of the rebuild to drop in a V8 for more power at Tahoe.

This beautiful baby boomer is looking pretty as ever.  We were happy to participate live in 2005 (her 50th birthday) where she won a trophy, and are excited for Bikini Bottom to once again be a part of the Concours at Tahoe for her 65th! 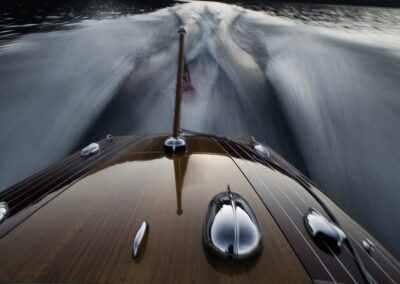 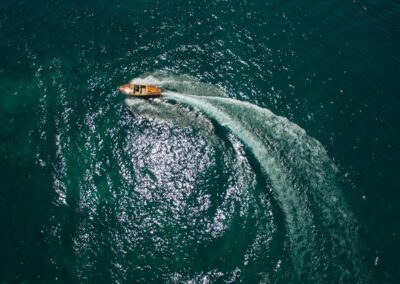 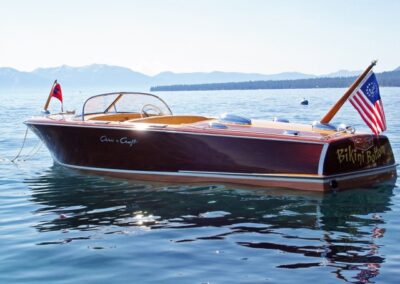