This 1955 Dan Arena Barracuda Sportster is the only known survivor of the seven that were built to compete with the Chris-Craft Cobra in a proposed Gentleman’s Racing Sport Runabout Class.

The Barracuda Sportster was the first successful polyester fiberglass inboard runabout. It was designed and built by Dan Arena, one of America’s foremost race-boat drivers and builder of high-speed racing craft. It made its debut in February 1955, at the Chicago Boat Show along with the Chris-Craft Cobra.

This particular Sportster is hull #3, and was sold at the Chicago Boat Show on February 12, 1955, to Francis R. Schooner, then owner of Lagoon Marine. It was the second boat sold, and was delivered on June 14, 1955. The boat has all original equipment, including the Dearborn 292 C.I., 175 HP Interceptor engine, which was the first production run of the Marine Ford “Y” block with the Dearborn transmission.

Bryan Fenwick found this boat during the summer of 2004 in a barn in Chicago, Illinois, where it had been stored for approximately 18 years. We purchased it that November and began and completed the restoration for its debut in the 2005 Lake Tahoe Concours d’Elegance to celebrate its 50-year anniversary.

With the end of WWII came a concern about both the quantity and quality of premium woods for marine use. Dan had been working with fiberglass components, such as engine cowlings and cockpits on the hydroplanes, and possibly planned to incorporate some fiberglass parts into his new boat.

As the boat neared completion, concerns about the time and cost it would take to build each boat from wood were raised. Inquires from the advertising promotions swamped the office, and Dan decided to change from wood to fiberglass for ease of production. He made some minor modifications to the design, to allow for the deck and hull extraction from the molds. 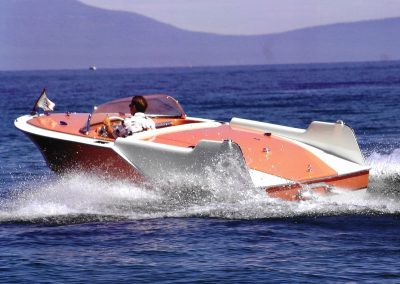 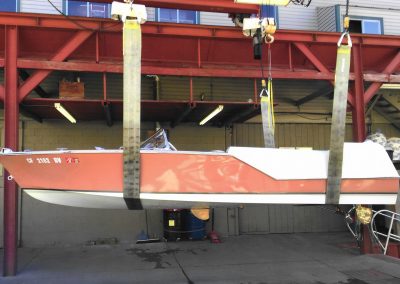 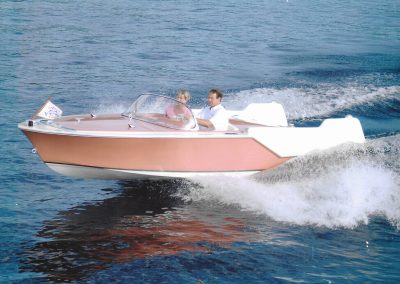